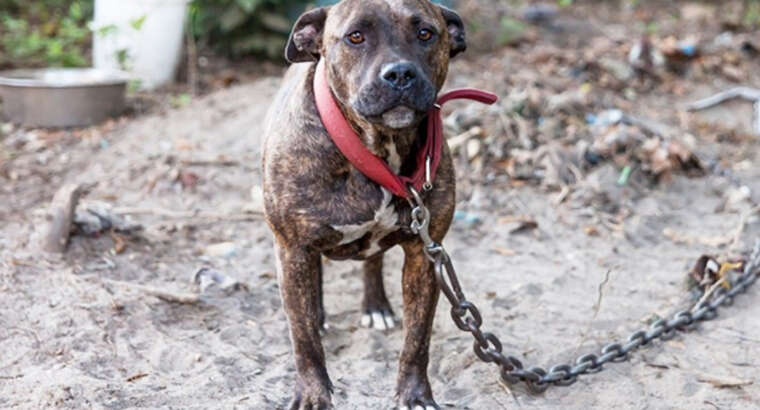 Since 2014, April 8th has been National Dogfighting Awareness Day. Dogfighting is a serious form of animal cruelty where dogs are put into heinous situations, where they often end up seriously injured or dead.

The cruelty does not just occur in the dogfight itself, but starts in puppyhood, where the dogs are raised in isolation and regularly conditioned for fighting and aggressive behavior. These dogs are given steroids and other drugs to help boost muscle mass and also to help with the aggression needed for the fights. Regrettably these dogs end up with cropped ears and tails that are performed with obscene and ruthless techniques. Pet dogs can be stolen from private yards to be used as bait dogs for the main fighting dogs, a practice that homeowners and renters need to be vigilant of.

During a dogfight, which can last up to 2 hours, onlookers make bets on which dog will win. These bets can be upwards of a couple thousand dollars and certainly add to the intensity of the arena. Additionally, there are sales and use of illegal substances, firearms, and many other weapons as a result of the large amounts of cash present at these events. The fights take place in a pit ranging from 14-20 square feet. The pit keeps the fight contained. Fights can happen anywhere from a back alley to a staged enterprise.

Sadly, young children are often in attendance at these events, which encourages enthusiasm for violence, and disregard for animal suffering as well as law enforcement. Homicides and other violent crimes have been connected to dogfighting. Law enforcement has gotten involved over the years and brought to light the disconcerting facets of dog fighting. Participating in dogfights is a felony offense in all 50 states and the District of Columbia, Guam, Puerto Rico, and the US Virgin Islands. In addition, knowingly bringing a minor to a dogfight can result in felony charges. Furthermore, being a spectator of dogfights is a felony charge since dogfights are not widely publicized and spectators have to seek them out. Dogfighting is not just a spur-of-the-moment act, it’s an organized practice. It makes investigations very difficult, risky and expensive to avoid being caught.

As current, or future, veterinary professionals, it is important to be aware of signs of abuse and maltreatment of animals. In order to help stop dogfighting, signs that indicate a potential for dogfighting include:

If you spot any of these potential signs of dogfighting, notify the local authorities immediately.

In conclusion, dogfighting is violent and highly secretive business that makes it difficult for law enforcement to infiltrate. It is extremely harmful to dogs and creates an underground, black-market type of culture that is difficult for authorities to track and enforce the laws. Using the signs listed above, Vet Techs can help to stop the vicious practice that is still prevalent across the world, and country, today.

Visit the following websites for additional information and help put an end to dogfighting: